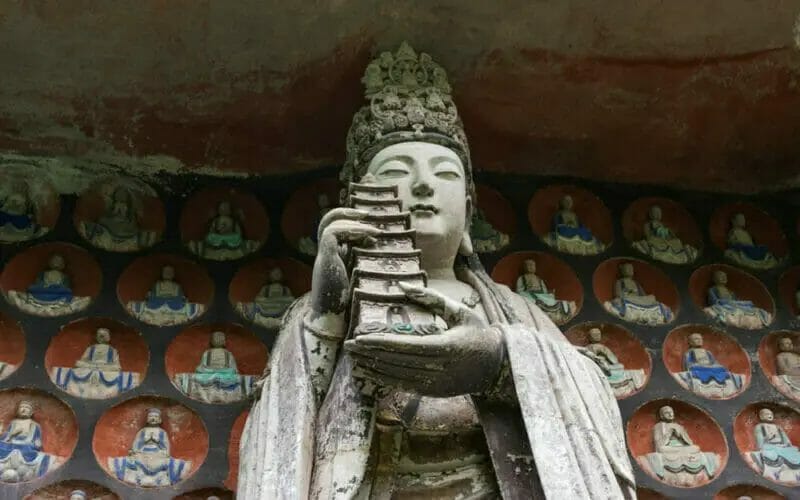 Manjushri, a deity of metaphysical knowledge, played a very important role among Buddhist monks in the 4th-5th centuries AD.

Mahayana practitioners believe that he is one of the great Bodhisattvas. In fact, he has been identified as the most important bodhisattva in Mahāyāna literature, with the Prajñāpāramitā sūtras being some of the earliest references to this bodhisattva.

Manjushri is considered the patron bodhisattva of wisdom and education, which are both seen as means to reach enlightenment. In Mahayana or Vajrayana Buddhist temples, Mañjuśrī is the next deity after Avalokiteshvara.

He is a bodhisattva who is youthful, a serene and enlightened being, the manifestation of the wisdom of all the Buddhas.

The name Manjushri refers to one who expresses himself in a gentle manner. His name literally means “Gentle Glory” in Sanskrit, and he is considered to be the embodiment of divine intelligence.

He is also known as the “Bodhisattva of Insight” for his ability to observe the true nature of reality.

It is said that those who worship Manjushri obtain knowledge, good memory, intelligence, resilience, and eloquence.

It is also believed that full knowledge can only be obtained by doing his sadhanas or chanting his mantras. Besides facilitating the incomprehensible aspects of knowledge, he is also a patron of astrology.

In tantric or Vajrayana Buddhism Buddhism, he is considered a yidam.

He is also known as “Jampelyang” in Tibetan Buddhism, a name which is often translated as “the Buddha of wisdom”.

He exemplifies the promotion of harmony and understanding among all beings and the fearless proclamation of the teaching and the truth.

Manjushri’s name (in China, Wenshu, in Japan Monju) appears in the Guhyasamāja-tantra, written around the third century AD, or even earlier in the Aryamanjushrimulkalpa.

In the Swayambhu Purana, there are many more fascinating stories about him. Bodhisattva Manjushri is said to be responsible for Nepal’s culture and civilization in these tales.

One legend says that Manjushri gave the Kathmandu valley its first inhabitants by establishing Manjupattan city.

According to some, he preached Buddhism in Nepal as a monk. He is also known to be the god of agriculture, the architect of the spiritual world, and the god of science.

Manjushri is worshiped with great pomp in Nepal since the first day of the year is dedicated to him.

The Statues of Bodhisattva Mañjuśrī

He has the appearance of a prince and is usually depicted as a princely figure. There are many different depictions of him. He has often been depicted riding on a blue lion or sitting on lion skin.

He removes all ignorance through his sword and gives transcendental knowledge through the book Prajnaparamita.

Manjushri is considered a source of transcendent wisdom.

Though he primarily appears in Mahayana scriptures, because of his association with wisdom it’s not uncommon for him to be seen in Vajrayana Buddhism or esoteric Buddhism as well.

In Vajrayāna Buddhism, Manjushri is a yidam or meditational deity, used by practitioners to achieve a state of awakening. Many types of Tantric and non-Tantric statues of Bodhisattva Manjushri exist.

Manjushri statues of non-Tantric design usually have two hands and one head. He is sometimes depicted sitting on a throne, sometimes seated on a lion, sometimes in meditation.

The Pure Land of Bodhisattva Mañjuśrī

The world where Manjushri lives is known as Vimala, which means “clean and pure.”

The Lotus Sutra says he has a pure land called Vimala (Japanese Yuima) in the East, which according to the Avatamsaka Sutra is one of the two best pure lands regardless of the past, present or future.

Mañjuśrī as a Protector of Buddha Families

Manjushri is one of the four great bodhisattvas, along with Avalokiteśvara, Samantabhadra and Kṣitigarbha but he is the one with the closest association with the Buddha of all of the bodhisattvas.

He belongs to the trinity of family protectors and the family he is responsible for protecting includes Shakyamuni, the first supreme Buddha. Mañjuśrī is also responsible for getting Nagaraja’s daughter to enlightenment in the Lotus Sūtra.

Mañjuśrī is best known for his sword, which is said to have the power to cut through ignorance. His association with literature and learning is reflected in the many artistic depictions of him carrying a book.

Manjushri is considered to be the patron saint of writers, poets, and other creative individuals. He represents the clarity of the mind.

He has the wisdom and insight to discern what is ultimately true. He is the patron of all who engage in the quest for wisdom. So, he is the one responsible for helping creative people find inspiration in the everyday work and situations.

The Mantra of Bodhisattva Mañjuśrī

Mantra has been a very important part of Buddhism from its beginning.

For instance, Buddhist scripture, such as the Mañjuśrī-mūla-kalpa, records the mantra of Manjushri.

The mantra of bodhisattva Mañjuśrī is a metaphor for his wisdom. It uses the first five syllables of the Arapacana writing system. The Manjushri mantra does not translate into English literally, like many other mantras.

The mantra appears as follows:

According to Large Sutra on Perfect Wisdom (Conze 1975), each syllable of the mantra means the following:

One of the most important things that a meditator can have is a comfortable meditation cushion. Meditation cushions are designed to promote good … END_OF_DOCUMENT_TOKEN_TO_BE_REPLACED

Meditation is an important aspect of Buddhism. You could say that Buddhism is a religion that is about being mindful, a practice that is often a … END_OF_DOCUMENT_TOKEN_TO_BE_REPLACED

It's commonly believed that "The foot feels the foot when it feels the ground" comes from Buddha, but it was actually written by a noted English … END_OF_DOCUMENT_TOKEN_TO_BE_REPLACED