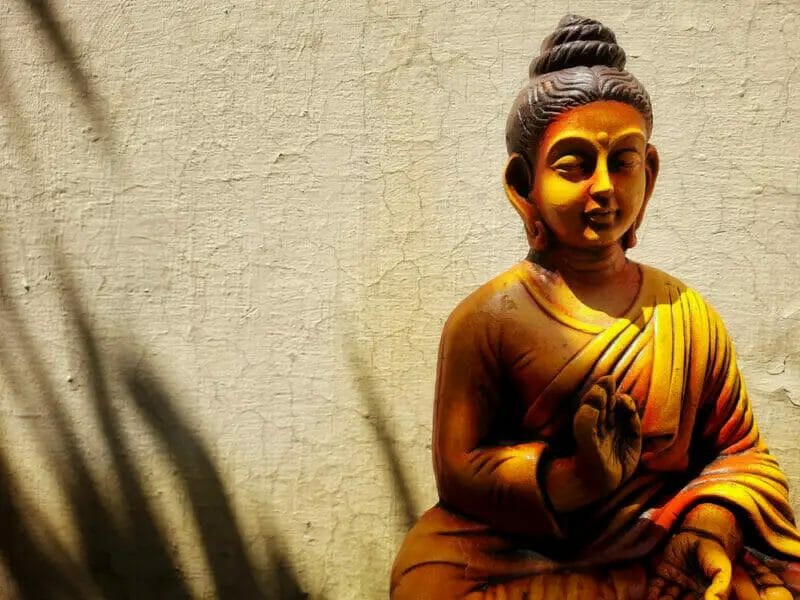 The phrase “Sadhu! Sadhu! Sadhu!” derives from Sanskrit and is therefore common across many cultures in India. In addition, Buddhism interprets this phrase in a very special way.

In Sanskrit, sadhu describes a holy person or entity. This is used after someone has completed some task with excellence or fulfillment- often religious related.

Wondering what these words mean when chanted together?

This article will explore what it means for Buddhists/Hindus to say “Sadhu! Sadhu! Sadhu!” and when to say it.

Sadhus are Hindu ascetics and renunciates who have given up worldly attachments. They often live in an ashram (a communal space) and follow a guru (spiritual teacher). They generally wear saffron robes.

Sadhu is a common word among Buddhists that means something like “well done” or “congratulations.”

The term Sadhu literally translates to “blessed one.” This can mean an enlightened being such as the Buddha, but also refers to the common man who strives for enlightenment in his own life.

As it appears in the Tripitaka, the word sadhu can be used to address Buddhist devotees. This word was used by the Buddha when devotees asked him about deep or hard issues.

The following examples demonstrate the meaning of sadhu in Buddhism:

Verse 35: The mind is hard to control; swiftly and lightly, it moves and lands wherever it wishes. It is sadhu to tame the mind, because a tame mind brings happiness.

Hence, sadhu is all three of these elements–a disciplined body, words, and mind.

As a result, Buddhists say “Sadhu Sadhu Sadhu” three times to answer a religious question or express their religious feelings if they find that the request is satisfactory. Its closest English equivalent would probably be ‘wow’ in this context.

Usually, Sadhu Sadhu Sadhu, the same word is repeated three times. It means disciplined body the first time, disciplined words the second time and disciplined mind the third time. In other words, by using the word sadhu three times, it means that in order to be a true Buddhist, it is necessary to discipline the mind, the body, and the words.

Saying Sadhu for the Fourth Time

When Buddhists say “Sadhu Sadhu Sadhu” thrice or sometimes another long “Sa…a…a..dhu” for the fourth time – why do they repeat?

The reason ancient Buddhists uttered the fourth “Sadhu” in such a long manner is that they reserved it for those who were extremely disciplined.

Those who merit all three Sadhu and the long fourth Sadhu are greatly disciplined and have entered the Noble Eightfold Path.

The word “Sadhu” comes from ancient Indian languages. A Sanskrit word meaning a holy person or sage; used as an interjection as well.

The chant of the three syllables has the effect of sending positive energy into the world and to ourselves.

One of the most important things that a meditator can have is a comfortable meditation cushion. Meditation cushions are designed to promote good … END_OF_DOCUMENT_TOKEN_TO_BE_REPLACED

Meditation is an important aspect of Buddhism. You could say that Buddhism is a religion that is about being mindful, a practice that is often a … END_OF_DOCUMENT_TOKEN_TO_BE_REPLACED

It's commonly believed that "The foot feels the foot when it feels the ground" comes from Buddha, but it was actually written by a noted English … END_OF_DOCUMENT_TOKEN_TO_BE_REPLACED