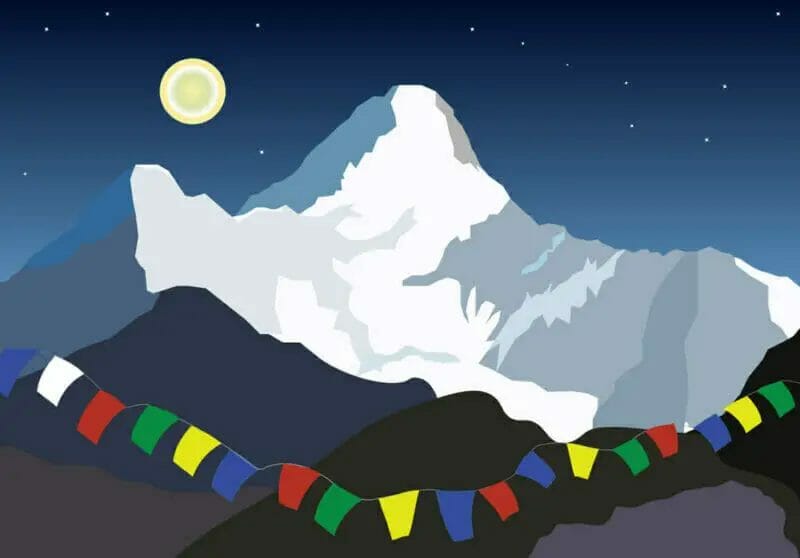 Is there anything more comforting than the feeling of cool, crisp air as you walk past a row of colorful prayer flags?

Many of us have seen prayer flags flying in the wind, and while we may not know what they mean, it’s important to understand the symbolism behind these ancient symbols. Even if you don’t have a connection with Buddhism or any other religion for that matter, it’s worth considering why people choose to display these flags.

So, what do they symbolize? Read on to find out. In this blog post, I will also provide instructions on how to make your own Buddhist prayer flags. You can use this as an opportunity to learn about the culture and spirituality behind these flags, or you can simply enjoy making them!

Buddhism is a religion with so many rich traditions that it can be difficult to keep track sometimes! Buddhists use prayer flags for their spiritually uplifting function so that they may increase mental clarity and trigger positive changes in our lives.

What Are Buddhist Prayer Flags?

The Buddhist Prayer Flag is typically a block-printed cloth that includes images and mantra quotes, and has some traditional meaning. Buddhist practitioners immensely value their symbols, ancient mantras, and connections to Buddhist prayer.

The flags are said to carry prayers from the ground up into the sky and then scatter them in all directions.

There are many variations in the flags, depending on the purpose of the flag or the culture depicted on the flag itself.

What Do the Buddhist Prayer Flags Mean?

Prayer flags are rich in meaning and history.

It is believed that the idea for the symbols and words written on the prayer flag originated from Tibetan Buddhism. Westerners are now becoming more familiar with this tradition.

In Tibet, the prayer flags with a vertical shape are called Dar Cho, where the word Dar means to enrich one’s life, to make one’s fortune better, or to bring health and wealth.

The term “Cho” refers to all organisms that are conscious. On the other hand, the prayer flags that have a horizontal shape are called Lung Dar.

Tibetan Buddhists believe that the flags help to spread good karma, and the flags are used to bless the villages, mountains, and land, as well as the people who live there.

It is possible that a prayer flag may lead you to pray to God and to your heart. The prayer flag, however, is not used to communicate with God. In nature, it spreads prayers and mantras for the welfare of all living things. Flags promote a peaceful and harmonious atmosphere, thereby improving life in general.

What Do the Colors of Buddhist Prayer Flags Mean?

Buddhist prayer flags come in five different colors, arranged according to an ordered pattern. Five fundamental elements on earth are represented by these colors. In order of appearance, the colors move left to right.

Prayer flags represent the union between heaven, human and earth.

Each flag of a set represents a single syllable in the mantra ‘Om Mani Padme Hum’.

What Do Buddhist Prayer Flags Say?

Buddhism is something I admire and I find that prayer flags are a wonderful way to show your faith. They are straightforward to make, and can make a powerful statement about your beliefs.

Their rectangular shapes usually have prayers printed on them in Tibetan/other languages and are hung from bamboo poles. The flags help intensify natural beauty and create a sound similar to soft bells.

The flags contain many different prayers, and one of the most common prayers found in Buddhist prayer flags is “Om mani padme hum”. The literal translation of this chant/mantra is “Hail, the Jewel in the Lotus”.

It’s not a mantra with one specific meaning. An array of values such as tolerance, renunciation, compassion and ethics are present here.

In order to understand the meanings of each word in the mantra, let us review:

How to Make Buddhist Prayer Flags

In the Tibetan Buddhist tradition, prayer flags are seen as a sacred religious symbol, and then have been used for centuries to send prayers or good intentions out into the world. Prayer flags are traditionally seen in the Himalayan region, and across India, Nepal and Tibet.

Many overseas countries have a misconception of how expensive it would be, or what materials you need for a DIY project but in reality they’re inexpensive to put together!

But don’t worry if you’re not crafty – Below you will find links to buy preassembled prayer flags and banners on Amazon:
https://www.amazon.com/Tibetan-Flags/s?k=Tibetan+Flags

How to Make Your Own Prayer Flags

Making Buddhist Prayer Flags is an easy way to hang out on a lazy Saturday and make something that will brighten the mood for a while.

This is not only an easy craft project that will teach you about Buddhism, but it’s also a great activity to do as part of a larger lesson on world religions or as part of a unit study on Eastern philosophy.

If you want to create your own prayer flags, follow these instructions:

To create a prayer flag, some general guidelines can be followed:

Video: How to make Tibetan prayer flags at your home! (DIY)

The flag can be hung up in any environment as long as there is wind; however, if there isn’t then using an electric fan may help keep the flag fluttering.

They are commonly seen outside of Buddhist temples or on mountains, but they may also be hung from buildings such as houses. You can hang Buddhist prayer flags outside during special days and festivals.

Prayer flags have been part of Buddhism for hundreds of years. They are used to spread peace and good thoughts around the world.

Some people also put up prayer flag to ward off bad luck or to bring good fortune and health to the home.

They have been used for centuries, and they continue to be important in modern times.

One of the most important things that a meditator can have is a comfortable meditation cushion. Meditation cushions are designed to promote good … END_OF_DOCUMENT_TOKEN_TO_BE_REPLACED

Meditation is an important aspect of Buddhism. You could say that Buddhism is a religion that is about being mindful, a practice that is often a … END_OF_DOCUMENT_TOKEN_TO_BE_REPLACED

It's commonly believed that "The foot feels the foot when it feels the ground" comes from Buddha, but it was actually written by a noted English … END_OF_DOCUMENT_TOKEN_TO_BE_REPLACED