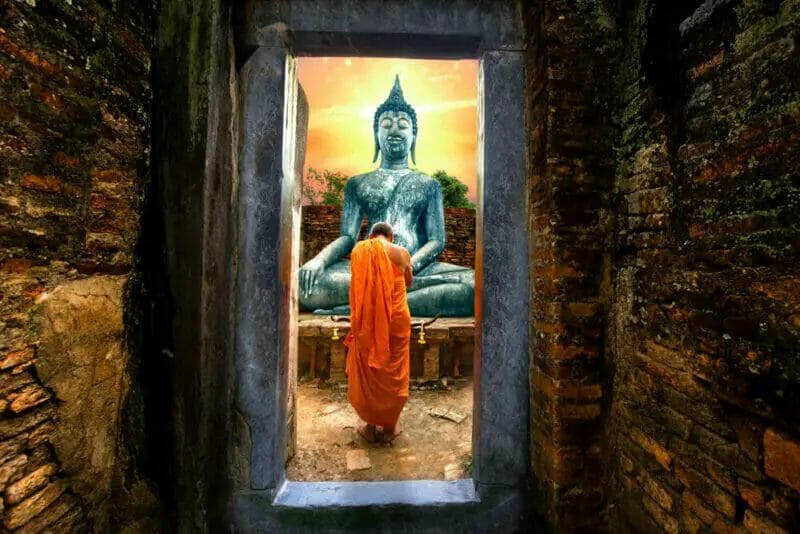 The act of worshiping is a common practice in many religions, including Buddhism. Worship of Buddha is a very important aspect in Buddhist culture. This article will discuss how often Buddhists worship and why.

In order to better understand the frequency and significance of Buddhist worship, we need to first explore what it means for Buddhist to “worship.” The word “worship” can be interpreted as paying respect or showing honor towards someone or something. This could mean giving thanks for blessings received from a higher power, praising an individual who has done something great, or even asking forgiveness for wrongs committed against another person.

Buddhism has its own set of rituals and rules, just like other religions. During childhood, rituals and rules of worship are taught in the family setting. As soon as a young Buddhist is familiar with the rules of rituals, he/she can perform them both in the temple and at home. Buddhist countries follow lunar calendars and thus there are no fixed days on which worship is held.

How Does a Buddhist Schedule Worship?

The Buddhist religion is a pretty diverse tradition with many different sects, each of which has its own approach to worship.

Buddhist worship can be as often or infrequent as one chooses to do so. Some choose to pray and meditate every day, while others may only do it once a week or month. It is up to each person’s preference how they would like their spiritual life to look like. On a broader scale, followers of Buddhism worship informally every day and formally on special occasions.

Buddhist worship typically is not limited to only one activity. Buddhists meditate, chant, and live a life of service so all of these are considered worship in Buddhism. What makes it difficult to answer this question is that there are many individuals who practice various forms of Buddhism with different philosophies so it’s hard to speak on behalf of an entire group!

“Puja” sessions are performed at home by the worshipers seated in front of images of Buddha, barefoot. Out of respect for the Buddha image, worshipers place their feet far away from the image. Then in remembrance of the Buddha, the group read his praises. This kind of prayer is referred to as “Buddha Vandana.” Typically, it is performed at home three to four times a day, in the morning, before lunch, in the evening, and before going to sleep. Meditation and reading of Buddhist texts are also practiced.

On the other hand, Buddhism has different sized temples. These temples are called pagodas in China and Japan. Buddha’s image or statue is a prominent feature of all Buddhist temples. Every month, Buddhists observe religious holidays on specific days. During these special days, Buddhists flock to the temple in large numbers.

Buddhist years are based on lunar phases. Consequently, the new moon determines the beginning of every month. Based on this calculation, each month will contain 29 or 30 days. That is why the Buddhist calendar has 10 less days than the Western one. Buddhists attach great importance to the full moon or new moon of every month.
More detailed information about the special Buddhist occasions can be found in the following article:

According to Buddhism, life is a continuous cycle of birth-life-death-rebirth. It’s a never-ending cycle, since you’ll reincarnate after death. Buddhists believe that the only way to break this cycle is to become enlightened through “Sādhanā”.
The process is continuous and doesn’t have a timetable attached to it. Everyone is welcome to engage in prayer/meditation/sadhana at any time. But the special occasions for praying are there only to preserve the spirit of Triratna (the Buddha, the dharma, and the sangha) in every Buddhist’s heart.

You can also find Buddhist around the world who live ascetic lifestyles that involve meditating for hours on end while living out of their backpacks in order to be as independent from society as possible.

It is up to each individual to decide what approach they take to purifying their Karma by fostering virtues and abandoning vices, as well as how much time they devote towards achieving this goal.

Many Buddhists, for example, believe that if they live by the five precepts and observe the Noble Eightfold Path, it doesn’t matter how often they go to temple or who their teachers are. But others do worship more than once a day and still others make an effort to visit temples at least twice a month.

One of the most important things that a meditator can have is a comfortable meditation cushion. Meditation cushions are designed to promote good … END_OF_DOCUMENT_TOKEN_TO_BE_REPLACED

Meditation is an important aspect of Buddhism. You could say that Buddhism is a religion that is about being mindful, a practice that is often a … END_OF_DOCUMENT_TOKEN_TO_BE_REPLACED

It's commonly believed that "The foot feels the foot when it feels the ground" comes from Buddha, but it was actually written by a noted English … END_OF_DOCUMENT_TOKEN_TO_BE_REPLACED